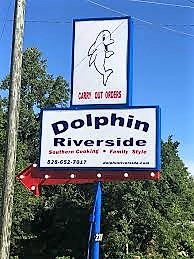 Mr. Adolph A. Justice, Sr., while surrounded by his loving wife, passed away on the morning of Thursday, May 21, 2020 at CarePartners Hospice Solace Center in Asheville.  The son of the late Hugh and Bertha Ramsey Justice, he was born in Burke County, North Carolina on February 14, 1925.

In addition to his parents, he was preceded in death by his first wife, Hazel Clay Justice; one son, Chuck Justice; four sisters, Hazel, Vera, Grace and Ruby; and three brothers, Ray, Ralph and Hugh, Jr.

A veteran of the United States Army, Dolph served during WWII where he served in both Africa and Germany in the tank division.  He received Combat Infantry Badge and the European African Middle Eastern Theater Ribbon while serving.  Dolph proudly served the public up into his early 90’s. During his employment at Old Fort Finishing, he had a vision of owning and operating his own business, and in 1960, Dolph opened Dolphin Fish Camp in Marion.  For 56 years it was his honor to have served the public and offer many their first job.

Dolph was currently a member of Temple Baptist Church in Marion. A devoted Christian, he was a deacon and leader of the RA’s at Garden Creek Baptist Church for many years.  A loving husband, father, grandfather, brother and friend, Dolph enjoyed watching the Atlanta Braves, but most of all, spending time with his family and the many friends he met along the way.

A funeral service will be held on Sunday, May 24, 2020 at 4:00 p.m. at New Horizon Baptist Fellowship in Marion, with Pastor Greg Withrow and Pastor Steve Bugenhagen officiating.  Interment will follow at Oak Grove Cemetery.  The family will receive friends from 2:00 p.m. until 4:00 p.m., two hours prior to the service, at the church.

To send flowers to the family or plant a tree in memory of Adolph A. Justice, Sr., please visit our floral store.